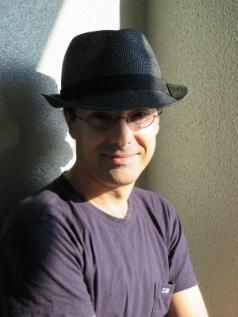 Dominic Fondé FGE is a professional glass artist who has been working with blown and engraved glass art since the mid 1990’s. He has many of his artworks in public and private collections in the United Kingdom and Europe. His public commissions notably include a series of engraved art glass windows at the Birmingham Botanical Gardens. In 2006 he relocated to Singapore and in early 2008 founded Dominic Fonde Glass Art. Dominic was for many years the only professional glass engraver working in Singapore and was featured on Media Corp TV programs "On The Beat" and “Knockout”. In December 2008 he was elected to Associate Fellowship of the Guild of Glass Engravers. In 2009 he took part in “Migrate” the 30th anniversary show of the Scottish Glass Society, which toured the UK. His piece for the show titled “9 feathers” was auctioned to raise funds for the Scottish Glass Society’s future projects. In 2010 he curated “Birdsong”, a touring exhibition that visited Japan, Scotland and Singapore and in 2011 he wrote and performed a one man show “The Human Tide”, a series of twelve linked short stories that explore the power of perfume .

Dominic became fascinated with the technique of drill engraving while working in London for glass artist Steven Newell in the late 1990's. Drill engraving offered him the opportunity to marry his two passions, glass and story telling. He began to inscribe his short stories onto glass objects, typically, jugs, vases or plates. Initially his short stories were science fiction and fantasy-based efforts but over time he began to explore the emotional weight that objects such as vases, wine glasses and paperweights have in peoples lives. These items might be fine craft objects or simply nick knacks picked up at a rummage sale, never-the-less they become of crucial emotional importance to people and their sudden loss can be a dramatic and devastating moment. A glass can hold more than water and vase more than flowers. They hold thoughts feelings and memories too. His recent work has expanded to include drawings as well as text and has seen him focus on images of birds and feathers.

Dominic has worked as a curator as well as an artist. “Birdsong” was a project developed with his long time friend, glass artist Kathryn Pearce. It started with the notion of birds sitting on telephone wires creating an image reminiscent of sheet music. Music is an international form of communication and so Dominic and Kathryn collaborated with two artists from Toyama Glass Studio in Japan. It was a chance for Dominic to push his drawing skills to the fore. He created a series of engraved bird images focusing on owls and crows. This show in turn led to his solo exhibition in Thailand, “The Feather and the Shadow” in which his engravings of owls are lit in such a way as to render the glass invisible and the engraved line as a shadow on the wall. This is a very modern take on a technique with a long history and tradition and highlights Dominic's understanding of his medium.

Glass exerts a fascination for Dominic due to his idea that we are currently living in the “glass age”. By this he means that glass is the defining technological material of the times, just as stone was in the stone age or iron in the iron age. Glass has played an indispensable role in shaping or world from its applications in medical science through to spectacle lenses and windows that keep out the weather and let light in. No material is so ubiquitous and yet so relied upon. Dominic regularly gives lectures and runs workshops titled “The world without glass” in which he invites people to imagine a world where glass has never been discovered.

Early 2014 saw a new phase in Dominic’s career when he realised a long held ambition to live in Japan. He relocated to Kobe with his wife and established a home studio where he engraved and writes. A final exhibition was held in Singapore in collaboration with the Japan Creative Centre. This show, “Ten Nights of Dream” was an exploration of the short stories of the same name by Japanese writer Natsume Soseki and featured collaborations with a number of artists.

In 2019 Dominic was awarded Fellowship status with the Guild of Glass Engravers.

Dominic's CV is now available to down load in either English or Japanese. Just follow the links below.